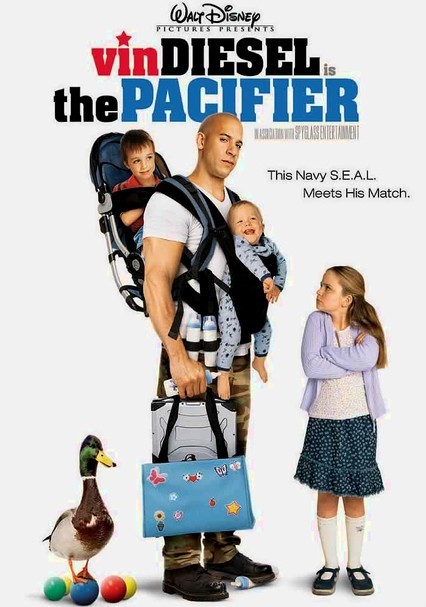 2005 PG 1h 36m DVD
A Navy SEAL who ends up as a baby sitter for a crop of unruly kids is shocked to discover that it's the hardest job he's ever had. His mission? Protect the children of a scientist who was killed while working on a top-secret government project.

Parents need to know that The Pacifier has a lot of cartoonish "action violence": no blood and no on-screen shooting but an exploding helicopter, a glimpse of a dead body, a lot of kicking and hitting. A parent is killed (off-screen). There's a lot of potty humor including many diaper jokes and a character covered with sewage. There's also some crude schoolyard language including "bite me," "boobs," "spaz," "skanky." One daughter wears a crucifix, though there is no further evidence of any religious faith. The portrayal of the bad guys has some unpleasantly racist overtones, and some of the "humorous" insults are sexist and homophobic. And there's intrusive product placement for Costco and other brands.

A lot of diaper humor.

Some stereotypes and cliches.

Intrusive product placement for Costco and other brands.