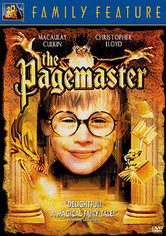 1994 G 1h 16m DVD
Director Joe Johnston's special effects wizardry brings shy and easily frightened Richard Tyler's (Macaulay Culkin) story to life. The young boy ventures into a library in a storm and is soon swept away into a make-believe world of adventure, fantasy and horror. Guided by the Pagemaster (Christopher Lloyd), Richard confronts his fears as he battles classic literary characters in a quest to find an exit back to the real world.

Parents need to know that there's lots of cartoon action in this film but no one gets seriously hurt. Characters fall from great heights and immediately come back to fall again just moments later. The hero and others are captured, then escape and immediately come back to get captured again. With a mix of animation and live-action, there are swashbuckling pirates, threatening sharks, scary hounds, unhinged authority figures, and a fire-breathing dragon with ghostly accomplices. Ominous music and spooky colors and sound effects heighten the suspense, but except for the youngest or most sensitive kids there's no real sense of jeopardy.

Lots of pratfalls and cartoon action; no one is seriously hurt. In the live-action sections, Dad falls from a tree house; 10-year-old Richard first crashes his bike and then slips on a hard floor, losing consciousness momentarily. Animated sequences contain scene after scene of cartoon peril: more characters falling repeatedly, a scary hound, Dr. Jekyl's transformation into Mr. Hyde, ghosts, a dragon, a threatening electrical storm, and more. Spooky music and effects accompany some of the above, heightening the suspense.

Sometimes you have to fight to make a wish come true. Reach deep inside and seize the courage to confront fears. Books open the door to great adventure and knowledge.