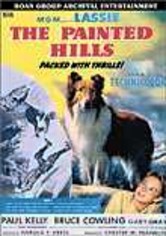 1951 G 1h 8m DVD
In this family film based on the novel &NFiShep of the Painted Hills&NFi_;, the resourceful and ever-loyal collie Lassie comes to the aid of miners and prospectors as they battle greedy claim jumpers in the old West, circa 1870. There's also a revenge plot as Lassie works diligently to bring her master's murderers to justice. The Painted Hills marked Lassie's last feature film for MGM.