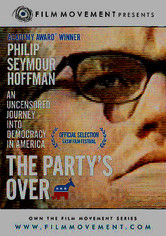 2001 UR 1h 22m DVD
This engaging documentary, hosted by a pre-Oscar Philip Seymour Hoffman, finds the actor covering the Democratic and Republican conventions in 2000, interviewing politicians, pundits and voters of all political stripes. Ample time is also given to the myriad protesters on both sides. The filmmakers score interviews with Ralph Nader, the Rev. Jesse Jackson, Newt Gingrich, Barney Frank, Noam Chomsky, Bill Maher and Michael Moore, among others.