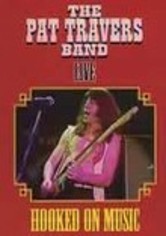 2006 NR 1h 1m DVD
Filmed in Germany on April 11, 1976, this concert is an early glimpse into the career of a rock guitar legend. Though he recorded several live albums, Pat Travers was seldom filmed during his rise to fame, making this gig to promote his first album an important document in a decades-long career. Proof of his influence, Travers' three-piece setup and performance style became the standard for rock guitar bands during the mid-1970s and early '80s.