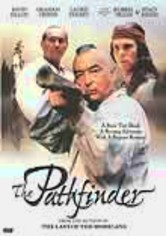 1996 PG-13 1h 44m DVD
In this sequel to The Last of the Mohicans, the Pathfinder (Kevin Dillon) defends a British fort under siege during the French and Indian Wars. His Indian father, Chingachgook (Graham Greene), and the lovely Mabel Dunham (Laurie Holden) are swept up in the battle, and the Pathfinder finds himself forced to choose between his father and the woman he loves. The film is based on last of James Fenimore Cooper's "Leatherstocking Tales."