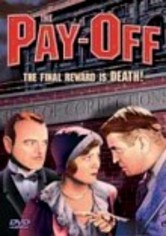 1930 NR 1h 11m DVD
When his rogue underling, Rocky (Hugh Trevor), robs an innocent couple of their last bit of cash, chivalrous crime boss Gene Fenmore (director Lowell Sherman) chastises the crook and takes the couple under his wing. Enraged, Rocky stages a coup, but when he winds up dead and the couple is wrongly arrested for his murder, Fenmore must decide how far he's willing to go for his ethical approach to crime. William Janney and Marian Nixon co-star.