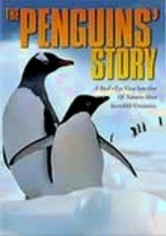 2005 NR 1h 0m DVD
The often hilarious antics of the penguin -- including birds of the chinstrap, macaroni, Adelie, gentoo and emperor variety -- are shot from all angles in this family-friendly documentary. Filmed over an entire year by a French camera crew living in Antarctica, the program follows the animals through their ongoing struggle for survival and captures them swimming, eating, mating, hunting, cuddling, waddling -- and even surfing.