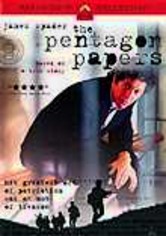 2003 R 1h 32m DVD
This compelling political drama is based on the true story of high-ranking Pentagon official Daniel Ellsberg (James Spader), who, during the Nixon era, strove to preserve American democracy by leaking top-secret documents to the &NFiNew York Times&NFi_; and &NFiWashington Post&NFi_;. The documents in question would eventually become famous as the Pentagon Papers, which revealed the true reasons for U.S. involvement in Vietnam. Alan Arkin and Paul Giamatti co-star.