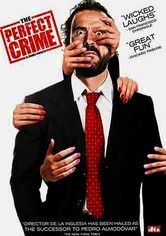 2005 UR 1h 45m DVD
Rafael, a top department store salesman with his pick of the comely female staff, thinks he has the perfect life -- that is, until a rivalry with co-worker Don Antonio, the one salesgirl Rafael has hitherto spurned, comes to his aid but at a price. Álex de la Iglesia's hilarious crime caper nabbed six nominations for Spain's Goya Awards.