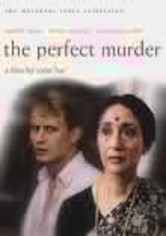 1988 NR 1h 33m DVD
Bombay inspector Ghote (Naseeruddin Shah) investigates the attempted murder of a powerful businessman's secretary in this mystery. Ghote sets out to find the attacker, but runs into roadblocks during his investigation. A Swedish criminologist (Stellan Skarsgård) tries to help but gets in the way, and because the attack occurred in an upper-crust household, the people Ghote questions remain tight-lipped due to India's complex caste system.