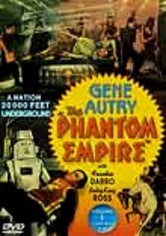 1935 NR 2 discs
Sci-fi, Western and musical genres blend together in this classic Saturday matinee serial, which features Gene Autry in his first starring role. Autry and his pals face an unexpected challenge when they uncover an underground lost civilization. Not happy with being discovered, the subterranean queen (Dorothy Christy) and her fighters try to take down Autry and destroy his ranch. Smiley Burnette and William Moore co-star.