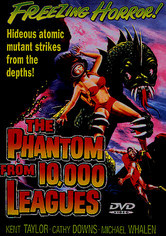 1956 NR 1h 21m DVD
When a radioactive monster emerges from the ocean's depths, leaving a pile of dead bodies in its wake, an oceanographer (Kent Taylor) teams with a government agent (Rodney Bell) to get to the bottom of the creature's murky origins. As it turns out, the deadly beast can trace its roots to an impossibly mad scientist (Michael Whalen) who didn't seem to realize that his research was destroying the world.