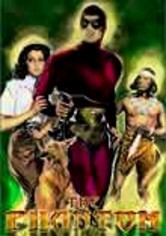 1943 NR 2 discs
With help from his beautiful fiancee and his four-footed pal "Devil," The Phantom, played by Tom Tyler, outwits the bad guys. At every move, they escape one death trap after another in this exciting 1940s serial adventure originally released by Columbia and based on the King Features' funny-paper hero.