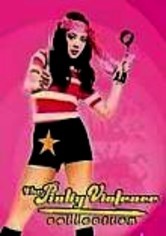 1973 NR 1h 23m DVD
Nudity and mayhem abound in director Atsushi Mihori's fast-paced thriller (the first of the Zero Woman adventure films). Tossed in the slammer for attacking her father's yakuza killer, Maki (Reiko Ike) is hell-bent on avenging Dad's death. After proving herself in a knife fight against a fellow prisoner (played by Miki Sugimoto), Maki and the inmates form a gang -- and plot bloody bad-girl vengeance on the murderer.