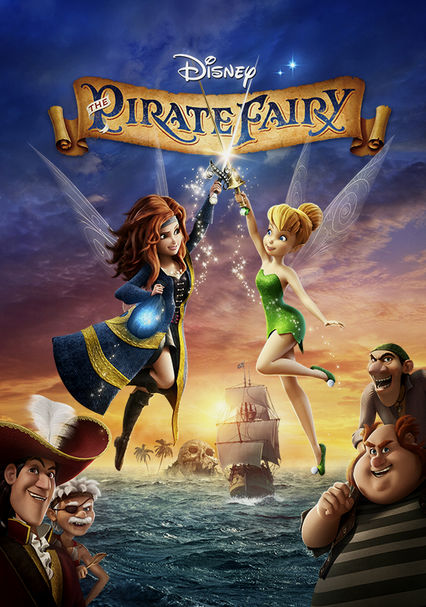 2014 G 1h 18m DVD
After free-spirited fairy Zarina makes off with some precious Blue Pixie Dust, Tinker Bell and her friends set out to find her -- only to discover that Zarina has fallen in with the wily pirates of Skull Rock.

Parents need to know that The Pirate Fairy is a direct-to-DVD Tinker Bell movie aimed at young fans of the popular Disney franchise. The movie focuses on what happens when one of the beloved fairies "goes rogue" and joins forces with pirates from Skull Rock to become the titular Pirate Fairy. There is a bit more violence in this installment than in others, because the pirates brandish swords and want to get rid of the fairies -- but no one is seriously injured (although James is bitten by a baby crocodile). This installment, like all of the Tinker Bell movies, focuses on the importance of teamwork and friendship.

The pirates brandish swords, capture the fairies, and hold them hostage. They threaten to keep the fairies imprisoned. A baby crocodile bites James.

This installment in the Tinker Bell franchise once again promotes friendship, teamwork, and using your talents. The fairies work together to help Zarina and recapture the powerful blue pixie dust. Zarina's story line encourages viewers to think about redemption and forgiveness.