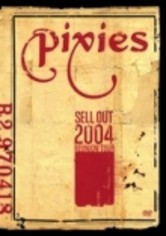 2004 NR 2h 25m DVD
A dream come true for the band's devotees, quintessential alt rockers The Pixies reunited for a series of concerts in 2004. Culled from seven of those shows, this video features 27 live performance tracks from the influential group. Songs include "Here Comes Your Man," "Monkey Gone to Heaven," "Bone Machine," "Wave of Mutilation," "Where Is My Mind," "Something Against You," "River Euphrates," "U-Mass" and "Gigantic."