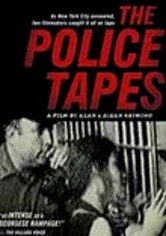 1976 NR 1h 30m DVD
In 1976, two filmmakers rode along with police officers from the South Bronx's 44th precinct to depict the violent crime they saw. The result is this riveting documentary that won multiple awards, including three Emmys. Dramatic footage captures bold gangs, murder investigations and an explosive hostage situation. Surprisingly candid, the officers talk about the frustrations and fears they face as they serve in the savagely violent streets.