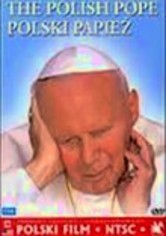 2006 NR 1h 1m DVD
Focusing on Pope John Paul II's national heritage and his continued connection with his native Poland, this fascinating documentary explores the pontiff's patriotism and warmth toward his people. A wealth of footage, including rare clips of his meetings with Polish leaders and citizens, illustrates the pope's devotion to his country, a trait that made him extremely popular in his homeland. Renowned Polish actress Anna Nehrebecka narrates.