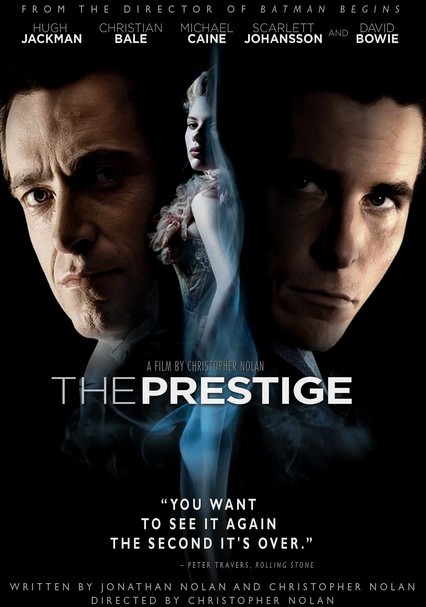 Parents need to know that this dark period piece about dueling magicians includes several violent deaths: two by drowning (the victims' frightened faces are visible), two by hanging, and another by shooting. Other violence includes one man shooting another's hand (there's some blood, and fingers are lost); the revelation that a bird has been smashed into a bloody pancake during a trick to simulate its "disappearance"; the accidental smashing of a woman's hand in a similar trick; and a man submitting to having his fingers chopped off (the action isn't shown, but the noise of the chop and his facial expression are jarring). Other than the violence, there's not too much to worry about -- a little sexual activity (mostly just kissing), fairly mild language, and some drinking.

Some kissing and passionate embracing by a married couple and later by a different, adulterous couple; women in showy, bustiers on magicians' assistants; adultery.

Explicit deaths by hanging, gunfire, and drowning (all are only briefly shown, but it's clear enough what's going on); bodies (human and cat) zapped by electric currents; hand is shot, resulting in blood and missing fingers; fingers chopped off hand (as a sign of commitment and "sacrifice" to art/life of magic); fall through a trapdoor leads to injury and a permanent limp.

Characters lie to each another incessantly, as well as commit murder and suicide; deception (in magic tricks and in audiences' desire to be fooled) as a theme.

Thematic: Magicians promote their own shows by crashing other magicians' shows with placards.

Drinking to the point of drunkenness (the result of frustration in neglected wife and ambitious magician).