The Pretender / Crime of the Age / The Daylight Zone 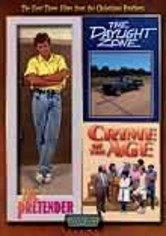 The Pretender / Crime of the Age / The Daylight Zone

1986 NR 1h 37m DVD
These three films from the Christiano Film Group present a mix of comedy and drama and revolve around the topics of deception, atheism and Christianity. In The Pretender, a boy poses as a Christian to get a girl of faith to go out with him. In Crime of the Age, a detective tries to figure out who in a group of six people is not a real Christian. And in The Daylight Zone, an atheist tries to prove that Jesus did not exist.