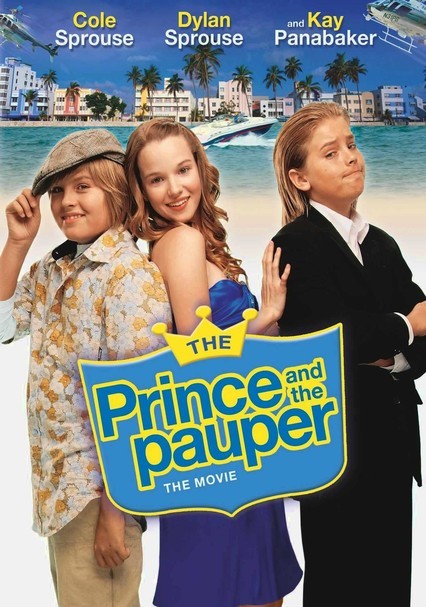 2007 PG 1h 32m DVD
In this updated take on Mark Twain's classic tale, young would-be thespian Tom Canty (Dylan Sprouse) sneaks onto the set of his favorite TV show, "Teen Spy," and switches clothes -- and lives -- with its star, Eddie Tudor (Cole Sprouse), for the afternoon. All's well until the production suddenly moves to Miami, and the boys find themselves stuck in their faux identities. Vincent Spano, Kay Panabaker and Dedee Pfeiffer co-star.

Parents need to know that this DVD is squarely aimed at tween fans of Suite Life of Zack and Cody stars Dylan and Cole Sprouse. The content is equally mild, with some fake-looking guns on a film set and one short boat-chase scene (though an outtake after the credits shows someone getting punched and hit over the head with bottles). Caregivers of the two boys seem to yell a lot, and a mother is pretty self-absorbed throughout. She also keeps the identity of her son's father a secret until the end, when she happens to run into him.

Prince and Pauper do some mild flirting with and staring at girls.

A boat chase; fake-looking guns are used on a film set; a stunt man gets punched and hit with bottles in what is supposed to be a funny aside post-credits.

Parents and parental figures do a lot of yelling, but no bad words are uttered.

The "grass is always greener" lesson gets learned rather predictably here; bratty movie star gets nice;, wannabe gets a shot at stardom.

The boys play a racing game on the XBox; Hansen's soda shown twice.

Grandpa says once, "What, are you high?"