The Prince of Tennis: Vol. 2 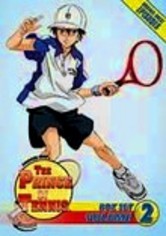 The Prince of Tennis: Vol. 2

2002 NR 3 discs
Teen tennis sensation Ryoma Echizen leads the Seishun Academy team to the district tournament, where they face a stiff challenge from an unexpected opponent. Can Ryoma live up to the legacy of his father, a famous former tennis star? This popular anime series mixes intense on-the-court action and off-the-court intrigue as the Seigaku students rally to retain their position as the top team in the conference.