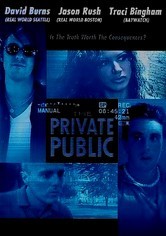 2000 R 1h 30m DVD
Big men on campus Zeke and Auggie (David Burns and Jason Cornwell, both of MTV's "The Real World") meet in jail and learn they share a love for Auggie's free-spirited ex-girlfriend Laina (Traci Bingham). The boys gain instant local fame after they co-produce a documentary on Laina's lesbian lifestyle. But it's their follow-up, which exposes an esteemed prof as a sex offender, that really stirs up trouble -- and puts the duo at risk of expulsion.