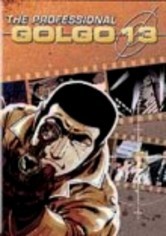 1983 NR 1h 30m DVD
Contract killer Duke Togo (aka Golgo 13) evades the mafia, corrupt government agents and hired assassins in this anime crime thriller. After rubbing out tycoon Leonard Dawson's son, Togo is hired to kill a mob boss. Danger lurks around every corner as Togo dodges mobsters, corrupt agents and Dawson, who will stop at nothing to ensure the hit man is killed, suspiciously ignoring the identity of the person who hired Togo to kill his son.