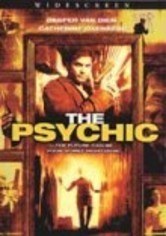 2004 R 1h 30m DVD
Killed in the line of duty, police detective Jack Barnes (Casper Van Dien) is brought back to life. But it's not the same life he left, and he's forced to confront psychic visions of violence. While being hunted by government agents and the men who killed his partner, Barnes sets out on a race to prevent his nightmarish predictions from coming true. The Psychic also stars Catherine Van Oxenberg, Paul Anthony and Cam Cronin.