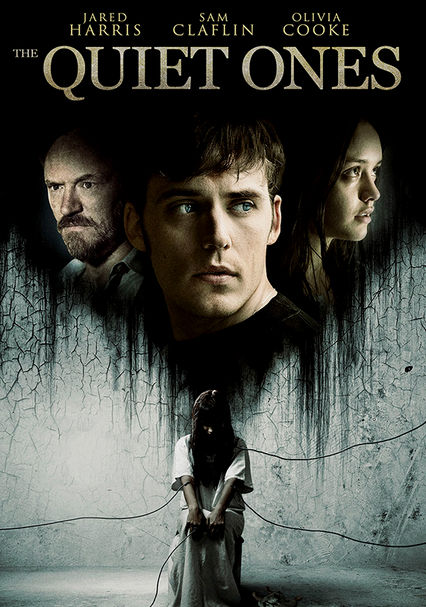 2014 PG-13 1h 38m Blu-ray / DVD
In this shocking tale based on true events, charismatic Professor Coupland and a few of his brightest students set out to summon a poltergeist. Creating the destructive entity is one matter; controlling it won't be as easy.

Parents need to know that The Quiet Ones is a supposedly fact-based horror movie that's set in 1974 England. There's lots of arguing, fighting, punching, and bashing with cricket bats, plus some burns and bloody corpses, but the bulk of the movie's scares consist of loud, sudden jump shocks. A disturbed college-age young woman undergoes a series of unsettling tests and is often heard screaming. One of the female characters is shown to be in a sexual relationship with two of the male characters; some brief nudity is shown (glimpse of a breast and backside), and the sounds of sex can be heard through a door. Language is infrequent but includes at least one use of "f--k" and "s--t." Characters smoke lots of cigarettes (accurate for the era the movie takes place in).

A brief glimpse of a woman's backside and breast. One female character sleeps with her boyfriend. Their lovemaking is heard through a door; after a loud crash, the shirtless man opens the door and explains that they broke the bed. The same female character is later shown kissing her professor and trying to seduce him. She's also shown taking a bath, although nothing sensitive is shown. The possessed girl tries to seduce the cameraman, with some kissing and reaching down his pants (off screen).

Many loud, sudden noises/movements. In flashbacks (old films), there are some disturbing "possession" scenes involving a young boy. The college-age possessed girl undergoes a series of unsettling tests. In one, she's burned with a candle. Her hands are mysteriously burned, and she's shown bleeding, covered with blood, and even spitting up blood. Two dead bodies are shown, covered in blood. A man's hand is cut, covered in blood. Characters punch and slap each other, and one is bashed with a cricket bat. Characters have devil signs burned into their flesh.

Language is very infrequent but does contain at least one use of "f--k," plus "s--t," "piss," and "screw." One character may or may not say "Jesus Christ" (as an exclamation) during a noisy scene.

The main message is probably not to meddle in things you don't understand. A scientist professes to be helping a disturbed young woman, but he seems to be doing it for personal reasons rather than selfless ones. Characters mostly argue and fight, rather than working together, and nothing is learned or achieved.

Several characters -- an older professor as well as younger college students -- smoke cigarettes all the way through the film (accurate for the era). They also share a champagne toast in one scene.