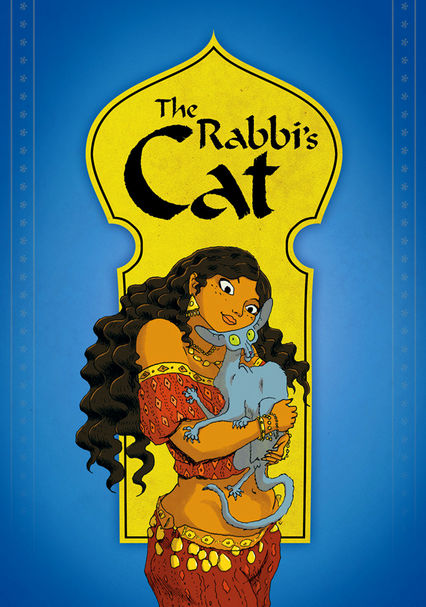 2011 NR 1h 29m DVD
This wacky and surreal animated feature, adapted from the graphic novel of the same name, relates the saga of Rabbi Sfar and his eccentric companions. Setting out from Algiers, the group conducts a search for an elusive African tribe and its capital.

Parents need to know that The Rabbi's Cat is a subtitled animated film based on books by acclaimed French graphic artist Joann Sfar that delve into the little-known history of Jews in pre-World War II Algeria. With mature themes including faith, family, philosophy, anti-Semitism, and racism, this isn't a light cartoon appropriate for younger kids. There's kissing, implied sex, violence, alcohol, and smoking. The violence -- including two murders and a brief sequence of a pogrom -- results from differences in culture and faith, and the sexuality includes shots of a bare-shouldered, bare-backed couple in bed and kissing passionately.

The rabbi's beautiful daughter is voluptuous and wears a traditional, midriff-baring Algerian outfit. The cat mentions how much he loves to nuzzle against her breast. An attractive young couple flirts and spends the night together. The woman is shown bare-backed and then in bed, where it's obvious the couple has had sex. They kiss passionately a few times, get married, and expect a baby.

After a lot of threatening looks and words, the Russian fights a Muslim to the death with a gun and swords and then is killed himself. Viewers see animated blood pooling around the dead bodies. There are a few fist fights and close calls during a difficult journey, and a cat kills and eats mice, a parrot, and other birds. A Russian pogrom is depicted in a more cartoonish style than the rest of the animated film, but some of the scenes are still violent.

The Rabbi's Cat explores themes of religion and philosophy and why people should attempt to coexist in peace while respecting one another's personal differences in beliefs and politics.

A Citroen jeep is featured.

Characters drink wine and vodka, and one sequence in which a Russian gets notably drunk leads to his offensive behavior and eventual death. Several characters smoke hookahs.