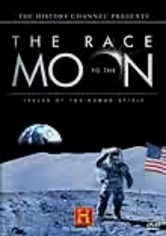 2004 NR 2 discs
Decades ago, the Soviet Union and the United States, already engaged in the Cold War, became locked in a fierce battle to travel to the moon first -- no matter what the cost. Join the filmmakers in this documentary exploration of that contest, which spurred both countries to innovate and push for technological advances to bring man to outer space.