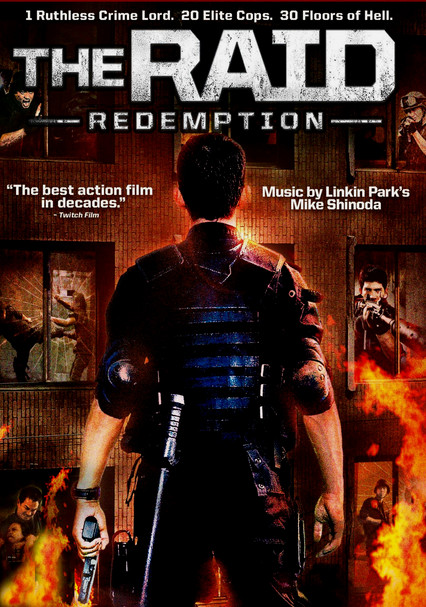 2011 UR 1h 41m Blu-ray / DVD
When an elite SWAT team goes after a drug lord holed up in Jakarta's most notorious tenement building, they find themselves trapped and forced to fight their way out through brutal gangsters loyal to the kingpin they were trying to assassinate.

Parents need to know that The Raid: Redemption is an ultra-violent Indonesian chase/fight movie. The entire movie is basically one extended battle, with guns and knives, as well as hammers, billy clubs, machetes, and martial arts. There's extensive blood, many dead bodies, and many other painful moments of bashing and smashing. Though the movie is spoken in Indonesian, language is also an issue in the English subtitles: "f--k" is used often, as well as "s--t" and other strong words. The movie's main setting houses a drug lab, and some of the occupants are junkies, but these things are only shown in brief flashes. Sex isn't an issue, and the hero is a fairly positive role model, despite the high number of dead and wounded he leaves in his wake -- he's an exceptional martial artist, and he always tries to do the right thing. Still, the movie is too intense for all but the most mature teens.

The main character says a fond goodbye to his pregnant wife/girlfriend as he leaves for work. He kisses her baby bump.

Though the movie is in Indonesian, "f--k" and "s--t" appear fairly often in the English subtitles. "Piss," "c--t," and "a--hole" are used once each. During the closing credits, a crude hip-hop song plays (in English), with words such as "bitch" and "boobies." There's also graffiti all over the walls of the building. Though the camera never lingers on anything, it's possible that freeze-framing a DVD could reveal more strong words.

The titular raid is undertaken for all the wrong reasons, and many deaths come of it. In the meantime, two estranged brothers do learn to work together again. But despite the title, no one is really redeemed.

The entire movie takes place in a huge apartment complex that operates as a drug lab. Viewers see quick images of this lab (just a few moments), as well very quick flashes of junkies and drug users in their apartments as the main characters run through.