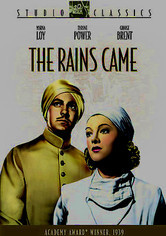 1939 NR 1h 45m DVD
Playboy Tom Ransome (George Brent) finds his life in India turned upside down by the arrival of his former paramour, Lady Edwina Esketh (Myrna Loy), now married to a nobleman. Nevertheless, Edwina appears willing to revoke her vows as she makes a play for Tom's best friend, Major Rama Safti (Tyrone Power), who's only interested in work. Meanwhile, Tom is developing feelings for the daughter of a missionary, who just may get him to commit.