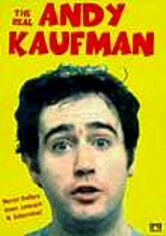 1979 NR 0h 56m DVD
This film contains rare footage filmed at a live Andy Kaufman performance in the Catskills, New York in 1979. The real Andy Kaufman was also caught off-guard speaking candidly in an out of character interview backstage after the show! This video also features exclusive interviews with the people who knew him best.