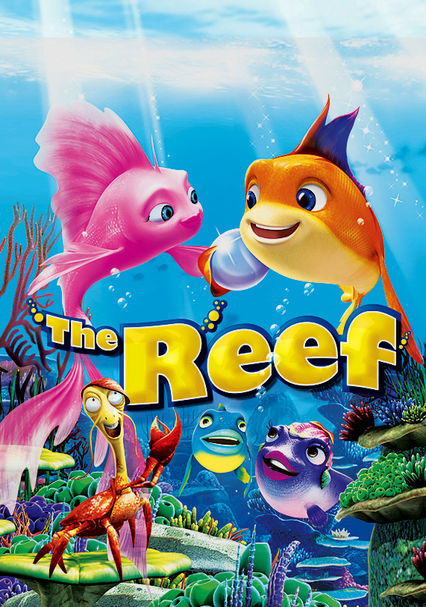 2006 G 1h 17m DVD
In this aquatic animated treat, orphaned fish Pi bids farewell to Boston Harbor for a new life with his psychic aunt in the Caribbean, where he promptly falls for beautiful angelfish Cordelia. But a nasty shark also has his sights set on Cordelia.

Parents need to know that The Reef's premise involves a fish witnessing his parents being captured by a net and never being seen again, which could frighten very young kids. There are a number of scary-looking fish with sharp teeth in the film. It also involves sustained bullying from a creepy tiger shark who demands the affections of a female fish and abuses everyone. Though the message is ultimately a positive one about sticking up for yourself, there are numerous scuffles, insults, and a major plot point that involves fighting to solve a problem.

The Reef begins with a fish whose parents are captured by net and never seen again. It features sustained bullying throughout in the form of a tiger shark who terrorizes and intimidates the ocean community, insults others, beats them up, and demands the affections of a girl fish to a creepy extent. A major plot point involves the training of a fish to fight another fish. Fish are involved in numerous scuffles, which involve a great deal of fin-slapping and shoving. There are quite a few scary-looking fish with razor-sharp teeth. In one scene, a shark chases a smaller fish at length, with the perspective being through a mouth full of sharp teeth chomping after him.

Consistent use of insulting language, such as "dumb," "idiot," "stupid," and more.

The Reef offers positive messages about community, integrity, doing the right thing, and standing up for yourself or others.