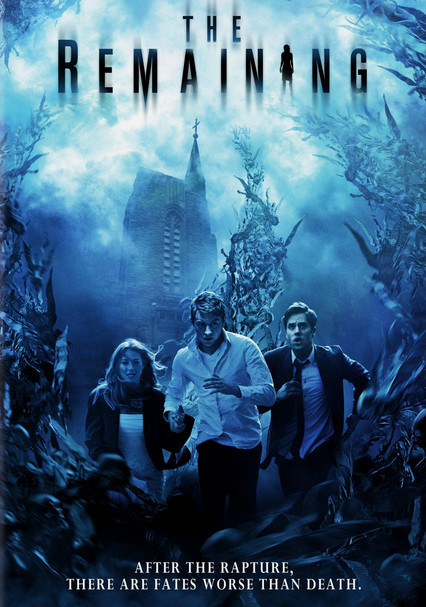 2014 PG-13 1h 28m Blu-ray / DVD
What should have been a joyous wedding is disrupted as a string of cataclysmic events signifies that the end of the world is near -- which forces the petrified survivors to choose between salvation and hell on earth.

Parents need to know that The Remaining is a faith-based horror movie about the immediate aftermath of the Rapture (as prophesied in the Bible's Book of Revelation). From the moment the Rapture begins, there's frequent horror movie-style violence and imagery. Characters collapse and fall to their deaths, with their eyes wide open in a weird, opaque glow. Children are shown dying in the middle of a basketball game; adults keel over in a restaurant. There's blood, arm dislocations, demonic noises, and characters dying via tentacles shot through their chests. Basically, it's Cloverfield with an evangelical Christian spin, and as such, will be best enjoyed by those who believe in the Rapture as described in the Bible.

Frequent horror movie-style violence and imagery. A man is killed by demonic tentacles shooting through his chest. A man falls to his death down a stairwell. Kids are shown instantly collapsing to their deaths during a basketball game. Adults are shown instantly collapsing to their deaths in a restaurant. A woman's arms are dislocated, and a nurse yanks them back into place as the woman screams. Demonic howling and shrieking throughout the movie. Characters are shown bleeding.

Depending on your beliefs, the movie could be construed as having a message about the importance of faith, though this comes accompanied by a lot of material about the apocalyptic tortures of the end of the world.

At a wedding, characters are shown drinking beer and wine, but they don't act intoxicated.