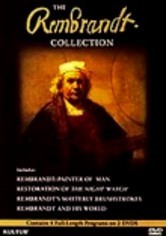 2006 NR 2 discs
This four-part collection of documentaries chronicles the life and works of 17th-century Dutch artist Rembrandt van Rijn, who greatly influenced his peers and the style of later artists. The series features an examination of his specialized paints, a tour of his Amsterdam house and an in-depth look at his stunning canvases. Also included is the story of the restoration of Rembrandt's masterpiece &NFiThe Night Watch&NFi_;, which was defaced in 1975.