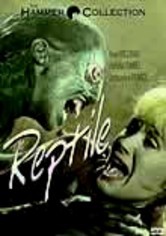 1966 NR 1h 30m DVD
Harry Spalding (Ray Barrett) is haunted by the mysterious death of his brother. Determined to uncover the truth about his sibling's demise, Harry and his wife move into his late brother's house in Cornwall, where Harry learns about the reclusive Dr. Franklyn, a former theology professor and expert in arcane religions. After more prying, Harry's attacked by a reptilian creature and becomes convinced that Dr. Franklyn is behind his brother's death.