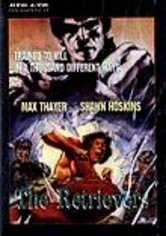 1982 NR DVD
When a new CIA operative (Max Thayer) discovers that his job involves kidnapping and murder, he teams with the sister of an agent who's written a book exposing the organization's darkest secrets -- and the two soon find their lives threatened. With government assassins closing in to silence them, can the pair survive long enough to get the manuscript into the public eye? Shawn Hoskins and Randy Anderson also star in this action thriller.