The Return of Casey Jones 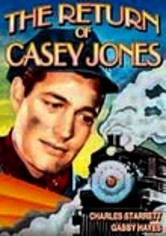 The Return of Casey Jones

1934 NR 1h 2m DVD
John P. McCarthy directs this silent train adventure set during World War I. Young engineer Jim Martin (Charles Starrett) fears that leaving home to join the war effort would destroy his mother's already failing health. Choosing to keep his reason to himself, he's soon branded a coward by his peers and ostracized by the community. He resolves to redeem himself, and the only one who can help him is his hero, legendary train conductor Casey Jones.