The Return of the Man from U.N.C.L.E. 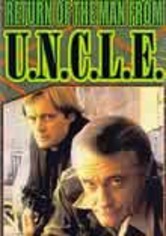 The Return of the Man from U.N.C.L.E.

1983 NR 1h 36m DVD
Fifteen years removed from service, Napoleon Solo (Robert Vaughn) and Illya Kuryakin (David McCallum) are called back to duty when a former U.N.C.L.E. agent conspires with the evil T.H.R.U.S.H. to extort $350 million from the government with the threat of a nuclear attack. "Avengers" star Patrick Macnee appears in this made-for-television movie as Solo and Kuryakin's new superior, Sir John Raleigh.