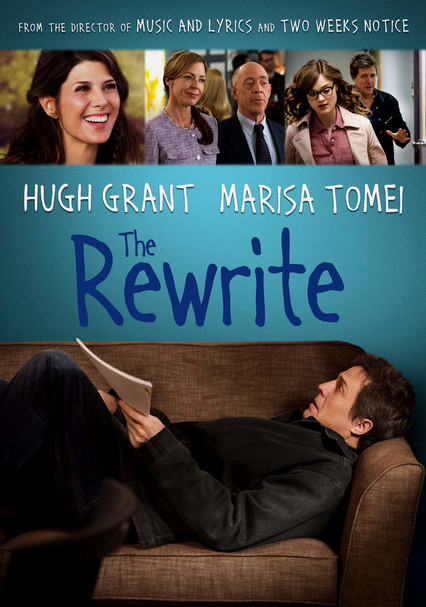 2015 NR 1h 47m Blu-ray / DVD
Once upon a time, Keith Michaels was an award-winning Hollywood screenwriter, but divorce and a string of unsuccessful films have left him with nothing but bad debts and blank pages. So when his agent arranges a job, a desperate Keith can't say no. Keith unexpectedly finds himself becoming invested in his students lives, including Holly, a single mom looking to start her own new chapter.

Parents need to know that The Rewrite, a romantic comedy set on a college campus, finds a callow Hollywood screenwriter (Hugh Grant) on the road to redemption when he's forced to take a teaching position in New York. His mostly off-camera sexual relationship with a young female student is a key plot element; they kiss and appear in bed after their initial sexual encounter. There are lots of stereotypes (an austere English professor, nerdy young men, phony Hollywood execs, a "Jewish princess," a gloomy depressive), but they're at least somewhat rescued by good performances and wry humor. Characters drink alcohol; the main character admits he drinks too much. There are two references to marijuana. In the aftermath of a school party, a young male with alcohol poisoning is taken away in an ambulance; he quickly recovers. The film includes a few obscenities ("ass," "crap," and one "f--k"). Solid messages about redemption and appealing characters help the movie feel wholesome in spite of its sexual content and collegiate antics.

A confirmed "ladies' man" and heartbreaker, Keith initially leers at attractive young women, selects his students based solely on appearance, objectifies females, and engages in sexual innuendo. He wakes up in bed next to a young, beautiful woman he's just met. A major storyline concerns breaking university rules against a professor having a sexual relationship with a student. Some kissing and brief foreplay.

Promotes the notion that it's never too late to redeem yourself and start over. Connecting with and helping others brings a sense of accomplishment and satisfaction. Quotes Yoda (of Star Wars fame) with sincerity: "Try not. Do or do not. There is no TRY." Also quotes Jane Austen: "Selfishness must always be forgiven because there is no hope for a cure."

Keith acknowledges that he "drinks too much." He has wine at a reception and beer at home. Marijuana references: "Most of the students are high"; "Bring my weed; I need to get baked." A young college student is briefly unconscious due to alcohol poisoning.