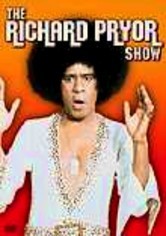 1977 NR 3 discs
Richard Pryor's 1977 comedy special on NBC was so successful that the network offered him a 10-week contract for his own show, but scheduling issues and other production difficulties reduced the schedule to only four shows. Those hours, however, are widely regarded to be among the best of Pryor's career. His mixture of political satire and sharp wit kept guests John Belushi, Maya Angelou, Robin Williams, Sandra Bernhard and more on their toes.