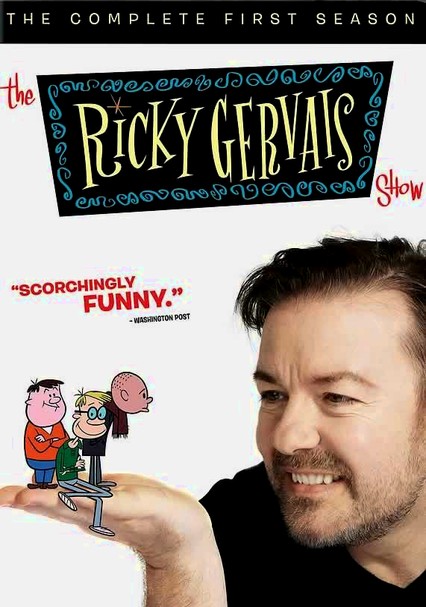 2010 TV-MA 1 season
This ingenious animated series brings to life the smash-hit podcasts of comedians Ricky Gervais and Stephen Merchant, in which the pair riffs mercilessly (and hilariously) on the oddball observations of their pal Karl Pilkington.

Parents need to know that this animated series is aimed at adults and contains an array of unbleeped swearing (including "s--t" and "f--k") and other iffy words most parents wouldn't want their kids using (for example, "bollocks," "wanker," and "knob" -- basically, British slang for "balls," "idiot," and "penis"). Sexual content is played for humor, and there's some cartoonish violence, too, including a few mildly bloody incidents. Two of the characters routinely gang up on the other and generally insult him the entire episode, calling him a "little bald Manc twat" or a "round-headed buffoon," etc. Some of the speakers' accents might be difficult to understand.

Some stories are centered on sexual topics or contain sexual humor, such as an anecote about nudist colonies or a machine that simultes sexual intercourse. You might hear terms like "butt plugs" or "robotic cock." There are a few bare, albeit animated, buttocks.

Cartoonish violence is strange but rarely bloody: an elderly woman gets stabbed in the head with a needle, or a live fetus is found incubating in a drawer, etc. Sometimes, a violent incident is described rather than illustrated, such as a story about chimps that chewed off a man's face and genitals.

Since it's pay cable, "s--t" and "f--k" are unbleeped, along with more descriptive words like "bollocks," "wanker" and "c--k." There's also other British slang parents might not recognize, including "Manc" (slang for a person from Manchester, England), "faffin'" (goofing around) and "knob" (penis). Some of the speakers' accents might be difficult to understand.

The whole point of the show is to make fun of Karl and tear apart his musings on a variety of topics he doesn't really understand. But the insults often cross the line between playful and demoralizing.

A few stories have to do with bars/pubs or drinking alcohol, mostly beer.