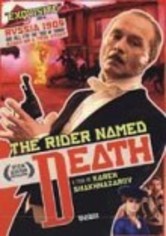 2005 NR 1h 46m DVD
Based on the 1909 novel &NFiThe Pale Horse&NFi_; by Boris Savinkov, this Russian drama from director Karen Shakhnazarov follows the members of a social revolutionary group who believe they're carrying out political justice by assassinating a series of high-ranking government officials. With the grand duke next on their hit list, Georges, Erna, Vanya, Heinrich and Fyodor must grapple with their own motivations for taking part in organized murder.