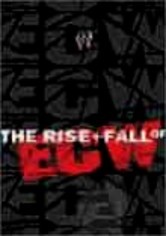 2004 NR 2 discs
In the 1990s, the bombastic world of pro-wrestling was amped up with the creation of a new league: Extreme Championship Wrestling. Discover how this brutal and bloody face-off garnered a heavy following at first but eventually lost its allure. Some of the hard-core bouts in this two-disc series include The Pit Bulls vs. Raven and Stevie Richards in Philadelphia; Tazz vs. Bam Bam Bigelow in Asbury Park, N.Y.; and more.