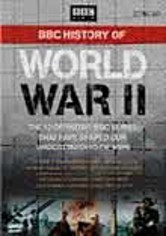 2005 NR 3h 20m DVD
What were the factors that led Great Britain, Italy, Japan and the United States to war? From the Great Depression and the aftereffects of World War I to the perceived threat of communism, Mussolini's dictatorship, Hitler's anti-Semitic policies and Japan's invasion of China, this documentary takes a close look at the buildup to the conflict and examines how each major nation decided that confrontation was inevitable.