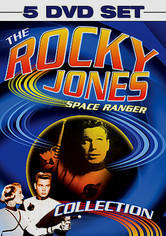 1954 NR 5 discs
Blast off with this campy collection of 16 long-lost episodes from the classic science-fiction show "Rocky Jones: Space Ranger," following the adventures of the titular character and his trusty space ship, the &NFiOrbit Jet&NFi_;. Extras include "The Subworld Revenge," a 1954 episode from the "Flash Gordon" television series; the feature film Missile to the Moon; and the original documentary Sci-Fi Heroes.