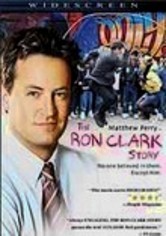 2006 NR 1h 30m DVD
Idealistic young teacher Ron Clark (Matthew Perry, in an Emmy-nominated role) is full of hope as he leaves the familiarity of his hometown for New York City's provocative and volatile inner-city public school system. Clark's fearless devotion and fresh approach to learning is his key to unlocking the chains of ignorance that bind his students. Randa Haines directs this Emmy-nominated biographical drama based on the inspiring true life of the innovative educator.

Parents need to know that in this made-for-TV movie, Clark's students have difficult family lives. One child is in foster care and gets abused by his foster parent. Another child is the de-facto mom to her younger siblings, as her mother works two jobs. The children have bigger problems than not knowing grammar, and their problems may disturb more sensitive kids or kids who have been in similar situations. Clark also has a crush on a woman who has a boyfriend and kisses her.

Ron kisses Marissa even though she has a boyfriend.

Tay gets into two fistfights and is beaten by his foster father. Tay's foster father also speaks abusively about him. Mr. Clark shakes a student's desk with the student in it.

The kids disobey Mr. Clark, vandalize his classroom, bully other kids, gamble, and bet on when Clark will quit. But the students eventually learn to treat Clark and themselves differently. They learn to believe in their academic abilities and to dream big.