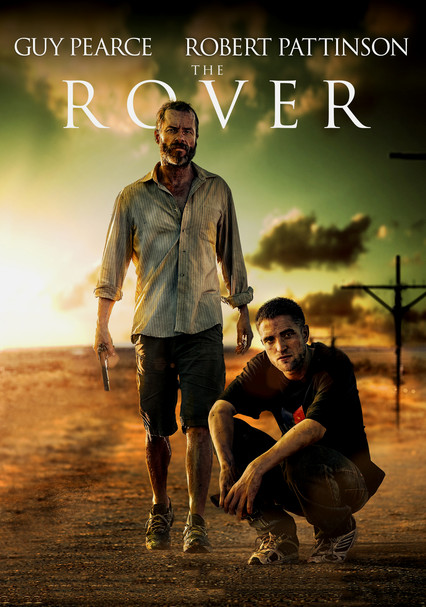 2014 R 1h 42m Blu-ray / DVD
Set in a chaotic future, this Outback saga follows loner Eric's brutal ordeal when a gang takes his only possession, his car, and then abandons him. Soon, Eric decides to undertake a journey of vengeance, bringing along an injured gang member.

Parents need to know that The Rover is a post-apocalyptic crime movie from Australia. It's very downbeat and violent, with a high body count for a movie with relatively few characters. Nearly everyone is shot, with lots of blood spatters and pools of blood. There's also a car crash and some brief fighting. The movie has some strong and/or disturbing sexual suggestion and innuendo, including a visit to a place that allows customers to sleep with young boys. This movie isn't for younger viewers, although it could be a word-of-mouth hit among adventurous older teens looking for the next "cool" movie.

One ambiguous scene appears to take place in a kind of brothel where customers can sleep with young boys. A woman offers such a service to the main character, though he ignores her. A shirtless boy is shown sitting in a dark room, where several figures can be seen lying in beds and on mattresses. There's a rude comment about two brothers coming "from the same woman's hole." A character tells a story about finding his wife cheating with another man, with some crude references. Keri Hilson's song "Pretty Girl Rock" is heard, with lyrics like "looking at my derriere."

A very high body count, considering how few characters actually appear on screen. Many of them are executed on screen, and quite a few more off screen, all with guns. One of them is an innocent woman, shot by mistake. The on-screen killings are frequently accompanied by spurting or pooling blood. There's a car crash and some brief fighting. A character hurls a rock at a barking dog. The main character is shown to have nasty-looking scars. Another character has a stomach wound that must be cleaned and treated.

The movie is relentlessly downbeat, and the ultimate message is that human life is cheap. Even further, we may deserve our sorry fate.