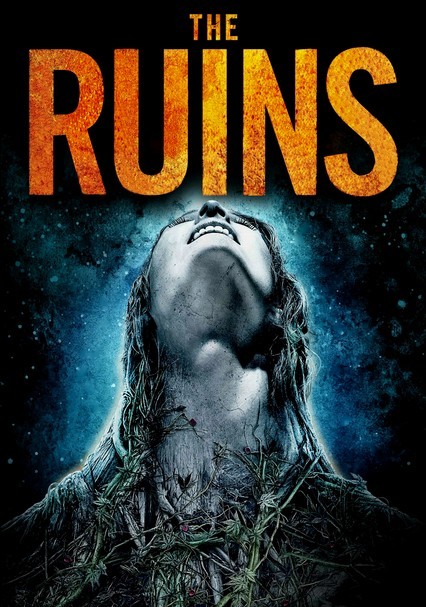 2008 UR 1h 30m Blu-ray / DVD
An idyllic Mexican vacation in Cancun takes a dangerous turn for four young Americans when a mysterious tourist persuades them to join an archaeological dig, and they subsequently find themselves lost within the cursed ruins of a forgotten city. Jonathan Tucker, Laura Ramsey, Jena Malone and Shawn Ashmore head the cast in director Carter Smith's bone-chilling thriller, adapted by Scott B. Smith from his novel.

Parents need to know that this gory horror movie features grisly violence, with sound effects and close-up images of broken bones, gashed flesh, and amputation (this last is particularly gruesome, with explicit gore, bone, blood, and sound). In another brutal, very bloody sequence, a girl who's tormented by vines that have invaded her body cuts her leg, torso, and head to pull the plant out. Weapons include arrows, guns, and knives. Girls show lots of skin in early scenes (one appears naked as she's dressing; her breasts are visible in profile, her bottom from the back), and there's a brief shot of a young man's naked bottom from the back. Drinking includes margaritas, beer, and tequila; language includes frequent uses of "f--k."

Early scenes show girls in bikinis and couples being interested in sex. Drunk, a girl tries to kiss a young man but is rebuffed. A young couple makes a bet with oral sex as the payoff; the next morning, after rising from bed and stripping naked (breasts and torso visible in profile, bottom visible from back), the girl agrees to deliver on the bet, and the film cuts away as she straddles her partner (she's wearing a camisole and underpants at that point). A young man steps out of shower (shown first with towel around waist, then brief shot of naked bottom from rear). Later scenes show the girls in underpants and skimpy, increasingly raggedy tops (occasional shots show cleavage). Kiss at end of ordeal.

Lots of violence, rendered in extremely visceral forms. A frightened girl is whisked off screen by an unseen monster. Weapons include guns, arrows, and knives. A character is shot in the head (graphic and explicit; half his head flies off); a small boy is shot in the chest. Other violence includes falls resulting in broken bones, penetration of bodies by vines, the brutal amputation of two legs (bones broken with a rock, legs hacked off with a hunting knife, bloody stumps visible, lots of screaming). Broken glass inside a wound (lots of blood). A girl starts cutting vines out of her own body, which yields even more blood. A girl accidentally stabs her boyfriend in the chest. A mercy killing is heard but not seen. A boy smears blood on his girlfriend to disguise her as a corpse.

Tourists make wrong decisions, betray and argue with one another. Mexican locals are portrayed as scary throughout.

Several scenes show drinking (margaritas, tequila, beer); when a character has his legs amputated, he's given liquor to kill the pain.