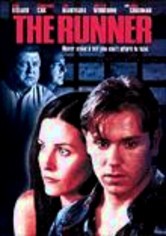 1999 R 1h 34m DVD
Compulsive gambler Edward Harrington (Ron Eldard) takes a job running numbers for a malevolent bookie (John Goodman) -- a man who takes pleasure in watching Edward squirm. He tries to start a new life with a beautiful waitress (Courteney Cox) who's carrying his child, but even she can't prevent his inevitable fall from grace. When he begins laying bets with the bookmaker's tainted money, Edward's life isn't the only thing on the line.